"Tactical note", a column that aims to highlight a detail, positive or negative, of Inter's last match. After Inter-Roma we talk about how Conte used midfielders.

DIFFERENT CENTROCAMPO – To face the Roma Conte could not change the men in midfield given the injuries, but it was not limited to repropose the usual formation. The technician changed the tasks of Borja Valero, Brozovic and Vecino with respect to the classic score. And the first signal came from the position of the Croatian and the Spanish. Ever since the number 20 has returned to the rotations, Conte has always used him as a bass director, moving Brozovic into the role of left interior. It was not so against the Giallorossi: the number 77 held its classic position, while Valero played precisely on the center-left. Vecino did the right inside.

VERTICAL IDEA – To view the whole here are the average positions of Inter taken from the Serie A League report: 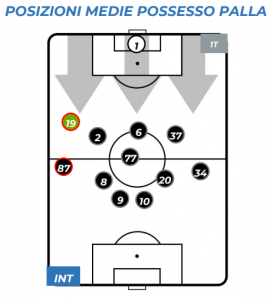 The two interns Vecino and Borja Valero played very high, definitely more than their habits, almost at the tips. A move wanted by Conte to try to stretch the Giallorossi and to play behind their central block. In fact, almost without any role points, Fonseca's men had an almost insuperable density in the middle of the field, as seen in certain phases of their possession. The two interns had the task of going vertically and climbing over the lines, while Brozovic had to manage the ball in his usual role. Why him and not Spanish? For the greater propensity to vertical football, both ball on the ground and with long balls. It is no coincidence that the two interiors have touched a few balls, almost like the two points: they had paradoxically similar tasks.

ALMOST DECISIVE – Vecino, a bit like last year's return derby, was a dangerous incursor, despite having too many errors of touch or concept. This is his heatmap always taken from the Serie A League: 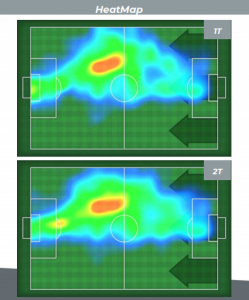 A box-to-box interpretation, which was about to become decisive had it not been for a big parade of Mirante and the aforementioned errors.

Barcelona-Mallorca, manta before Inter. Messi from panic, trident in goal

Barcelona-Mallorca saw the blaugrana's wide victory before the Champions League match against Inter with a score of 5-2....
Continua a leggere

Serie A, Juve remain second: Sarri and CR7 defeated 3-1 by Lazio, Inter at +2

Inter remains at the top of the rankings. After yesterday's Inter draw at San Siro against Roma ,...
Continua a leggere

" Too bad for the final result, head on Tuesday! Always Forza Inter ". Thus, through his Instagram...
Continua a leggere

Prandelli talked about the Inter season and the draw against Roma. The coach emphasizes the Nerazzurri's excellent results,...
Continua a leggere
- Advertisement -

Labate: “A golden point against Rome. Great life lesson of Antonio Conte in … “

Tommaso Labate, journalist and well-known supporter of Inter , has recently declared to be ready to tattoo himself...
Continua a leggere

Giroud wants to leave, but no concrete offers. Inter, do you stay at Chelsea?

Giroud is strongly approached at Inter ahead of the January market. The attacker could be the missing option...
Continua a leggere

EDICOLA TS – Conte is an emergency: Inter in Turin with 5 absences. Mazzarri: “I believe it”

"A crazy Saturday". This is the title of...
Continua a leggere

Draxler closes at Inter: “I do not intend to leave the PSG. Here I feel at home “

The words released in Germany by Julien Draxler...
Continua a leggere
- Advertisement -

Barcelona-Mallorca, manta before Inter. Messi from panic, trident in goal

Barcelona-Mallorca saw the blaugrana's wide victory before the...
Continua a leggere
Latest News

Serie A, Juve remain second: Sarri and CR7 defeated 3-1 by Lazio, Inter at +2

Inter remains at the top of the rankings....
Continua a leggere
Latest News

" Too bad for the final result, head...
Continua a leggere
Latest News

Prandelli talked about the Inter season and the...
Continua a leggere